I first met Bob, when I was working on David Michod's " The Rover "

back in 2012.  Bob owns land in and around Quorn, with some of the most picturesque areas .. including the famous dead trees at Willochra Bridge.

On meeting him you instanly get abused and given a mouth full of obsenities...Commonly known as Bob Fu.king Finlay.

This is part of his charm and you need to give him the same back.

Under all this abuse lies a true bush character with a heart of gold.

He had a soft spot for the Film industry that dates back to 1950's,

Bob was involved with horse racing thru his family. He was a very accomplished horse rider, spending his youth in and  around the Stables, riding trackwork for over 30 years.

He tells stories of meeting Robert Mitcham  being in town for

" The Sundowners " 1959 along with Chips Rafferty.

He said that all these Hollywood guys could really drink.

Last year I could see that Bob was not well , even though he made it to the Austral each evening for a few beers and pick up some dinner.

I presented him with his own parking cone .. so he could be guaranteed a park out the front of the pub.

He promised me he would be around for when I came back to do the second block of " The Tourist " alas I missed him and could not get back till July.

Bob was a special man and will always be in my thoughts when visiting Quorn.

A big thank you to his daughter Kylie, who I met up with and sent me some articles from the Quorn Mercury along with Bob's Funeral Celebration flyer. 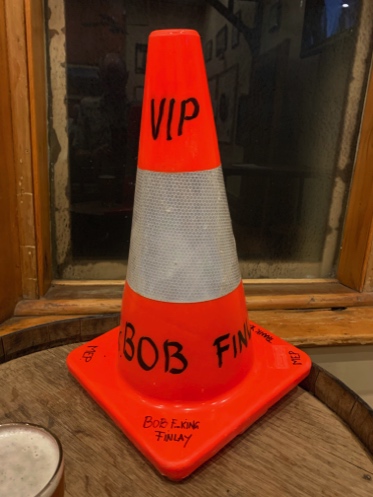 installed at The Austral Hotel Quorn